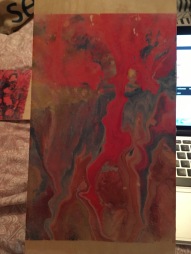 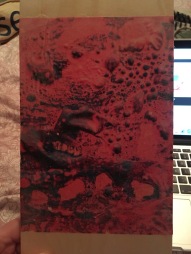 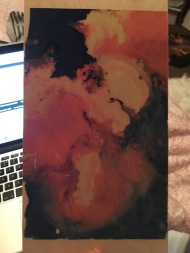 I much prefer the the two pictures of wet paint (two on the outside) rather that the dried image. I feel like with these two theres more ambiguity with what it could be rather than the middle transfer which accurately looks like just a photo transferred on to wood.

I like the vibrancy in colour and I think the final combination with all of them will hopefully look quite overwhelming. In the future I think it will also be interesting to transfer them on a much larger scale and zooming in even further so there becomes confusion over what the subject matter might be. This would make them appear much more abstract, perhaps purely focusing on colour.

In terms of colour in the photos this will definitely change the feel it gives. The more muted, organic tones make the pieces look much more naturalistic which I think works well as they are being displayed against a wood grain pattern. The patterns in some of the photos also seem connected to nature in some way because of the flowing lines like water or curvaceous bubbly matter that could look like fungus. This has an interesting contrast with the method of how the piece has been made (through lots of mechanical processes). The more vibrant photos make them look alien in some way as they still hold the naturalistic form but something appears not quite right.